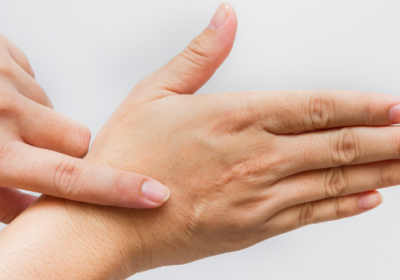 Dupuytren’s contracture is a strange condition that causes one or multiple fingers to become irreversibly bent. This occurs due to the hardening of the fascia, a fibrous layer of skin tissue in the palm, yet researchers have been unable to ascertain a cause.

Dupuytren’s may seem obscure, but it is surprisingly common, with the Dupuytren Research Group suggesting that 15 million Americans suffering from the contracture to some extent. The condition is prevalent among both men and women, although it appears that the latter do not become significantly hindered until later in life. Dupuytren’s tends to affect the ring and little fingers most and can be present in both hands. It can take several years for symptoms to progress. At first, lumps and ridges begin to appear on the palm before getting permanently stuck in a bent position.

Medical experts have linked Dupuytren’s contracture to heavy cigarette and alcohol consumption, in addition to diabetes, epilepsy. Genetics are also thought to play a role.

Treatments for Dupuytren’s are limited and are notorious for only temporarily managing the condition. Many patients have a fasciectomy, which makes a cut to straighten the finger. However, the recovery time can take one to three months, and there is still a risk that the contracture may return. Potential side effects of a fasciectomy include infection and a numbing of the finger. For infections, applying a CBD topical may be useful, as the cannabinoid is antibacterial and antifungal.

Some choose to have medicine injected into their hands, with a treatment known as collagenase clostridium histolyticum – while the recovery time is quicker than with a fasciectomy, taking just two weeks, the chance of the contracture coming back is much higher.

The lack of understanding and therefore treatments has led many patients to take matters into their own hands, and experiment with various alternative remedies. These include magnesium oil, coconut oil, primrose oil and also medical cannabis. Cannabis-infused salves and creams are more popular than ever, and are being used to manage pain, arthritic conditions and more. While Dupuytren’s is not dangerous from the point of view that it is not life threatening, the condition can be come disabling at its               most severe stages, and the effect that this has on quality of life and mental health cannot be dismissed.

The possibilities of medical cannabis

Dupuytren’s has remained mysterious, and there is no clinical research on the therapeutic value of cannabis, and cannabinoids such as cannabidiol (CBD) and delta-9-tetrahydrocannabinol (THC), in the treatment of it. However, there are a few online anecdotes that mention cannabis-infused creams positively, and a study was recently conducted that looked at whether the fascia tissue contained cannabinoid receptors.

Research carried out in 2016, which was published in the European Journal of Histochemistry, was focussed on the possibilities of medical cannabis for fibromyalgia, however, determining the presence of cannabinoid receptors in the fascia tissue could also be relevant in finding out more about Dupuytren’s.

Furthermore, Dupuytren’s patients often try specialized exercises in an effort to manage their illness, with these helping to slow the onset of symptoms. While not entirely related, research on osteopathic manipulative treatments has revealed these can help stimulate endocannabinoid production – John McPartland’s 2005 study on the cannabimimetic effects of these treatments showed that anandamide levels rose by 168 percent.

Hence, it is possible that massage therapies for Dupuytren’s is boosting anandamide production and managing the condition. If so, then it stands to reason that cannabinoid treatment in the form of infused creams could also be effective. There is evidence that non-psychoactive CBD increases anandamide levels, not by creating more of the endocannabinoid, but by stopping it from being broken down.

A case report on the Society of Cannabis Clinicians described how a 46-year-old man with Dupuytren’s contracture managed to resolve the condition using a cannabis-infused salve and a nitrile glove. The condition had gotten worse over many years, with the thickening of the fascia causing the third finger on his right hand to bend inwards. After applying the salve for a year, he claims that the Dupuytren’s had reversed and that the pain was now gone.

The report referenced a study from 2013 which found that the endocannabinoid system, and specifically cannabinoid receptor 2 is a “mediator of mesenchymal stromal cell immunosuppressive properties.” There is a theory that Dupuytren’s is – at least partially caused – by the upregulation of myofibroblasts. In 2018, a study showed that THC “suppresses the proliferation of hepatic myofibroblasts.”

What can Dupuytren’s patients do?

Thankfully, medical cannabis is very well-tolerated by the body, and with topicals, even products that contain THC, which is typically psychoactive, do not cause a “high” – THC’s psychoactive effects only manifest when the compound binds with CB1 receptors in the brain. Therefore, it’s safe to try out gels and creams with no ramifications. CBD products made with hemp are legal all over the United States, and topicals do help to ease pain and inflammation symptoms in several conditions.

As medical cannabis goes mainstream, it’s likely that self-medicating will become more common, and that we’ll hear more stories about the effectiveness of CBD creams and similar products in the treatment of Dupuytren’s. However, until a clinical study on cannabinoid therapy for the condition is done, it’s impossible to make any definitive medical claims.

Given the benign nature of Dupuytren’s, it’s not a shock that solutions for the disease have been few and far between. Nor, considering the stifling of cannabis research, is it surprising that studies on the herb’s potential to treat Dupuytren’s are lacking. But we have learned in recent decades that the endocannabinoid system is a key heath regulator, making the discovery of cannabinoid receptors in fascial tissue particularly interesting.